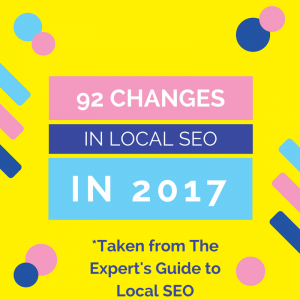 This year was exciting for me because I decided to launch a training guide for Local SEO that I spend time updating every month.  When I started the project I knew it would be time consuming but didn’t quite realize how much would need to be put into the guide to keep it current and accurate.  I spend 4-6 hours a month updating it but the list of stuff to add still keeps growing.  Part of why my current subscribers find the guide so valuable is because it helps them keep track of the ever-changing nature of Local SEO.  What tactics still work? Which ones don’t?  What tips or tricks help you get the most of the new features Google My Business has implemented?  These are the questions I’m seeking to answer.

As a conclusion to a great year, I wanted to list out all the changes that I’ve been tracking along with some things that are to come.

Feature Changes to Google My Business in 2017

(These are all algorithm updates that were to the local results, not organic)

(Note: these are all pulled from updates that I have added to my guide this year)

In addition to all that, I’m always testing new things to see what has changed and how it should impact the way that we service clients.  Here are a few things I’m currently testing that I’ll be reporting on in my guide in the coming months in 2018:

My list of things to add is currently at 47 topics and growing fast.  What was your favorite change in 2017?  If you have any suggestions of things you think I should look a next, please leave them in the comments.  The Expert’s Guide to Local SEO is for sale over at LocalU.

At our April LocalU event, I covered Shades Of Grey: Controversial Local SEO Tactics that Drive…

In the second part of our 99 Problems, we dive into the world of dentists.…