If I had to pick one misconception about Google My Business that has withstood the test of time, it’s the misconception, or rather myth, that the business owner who has claimed and verified the page is now the owner of that page. This is simply not the case. Joy touched on this recently in her Moz article titled “Yes, Competitors Can Edit Your Listing on Google My Business” and I highlighted an example of this back in the day when I wrote this article for Imprezzio Marketing titled “Why the $%!# Does Google Keep Updating My Business Hours? (A Case Study). Although these articles cover a lot of ground, the underlying lesson that you need to have a grasp on is the fact that you have less control over your listing than you think, and you certainly don’t own your listing.

Groupon Bidding on Your Brand

There was an interesting discovery last week by Phillip Barnhart shared over at the Local Search Pros community. Phil noticed that a paid ad/deal for a Groupon was appearing for the business on mobile. “Here is a Groupon ad placed directly in a mobile Google My Business listing for the same business, similar to +Evan Oder ‘s example.   I have management access to this GMB account, and we did not have to authorize or grant access to Groupon or Google for this.  Awaiting return from a call into AdWords.  Their initial response was that this was a test being run with Groupon, but they are trying to confirm.” 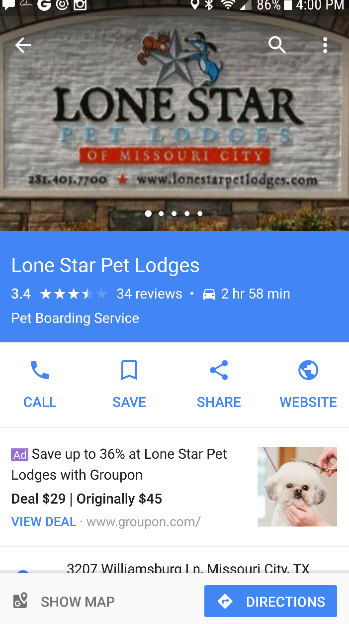 I found the Groupon ads that Phil pointed out to be fascinating so I wanted to see to what extent Groupon was bidding on brand names of companies that used Groupon. I discovered that this is a common practice.

I went to the Groupon site and looked up a few local businesses in my area. The first one I looked up was a local boxing academy called Durham Boxing Academy. They had a Groupon for a one-month unlimited membership for 74% off. I performed a search on Google on desktop and mobile and sure enough Groupon is bidding on their brand name and is the first result in the SERP. 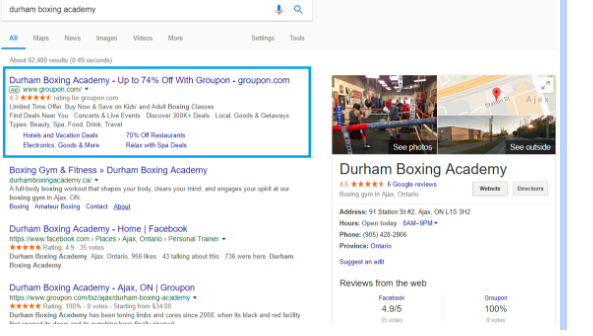 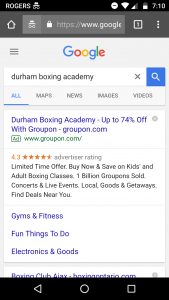 Next I checked out Me First Fitness which also had a Groupon. Sure enough, Groupon has also bid on their brand name using Google AdWords. 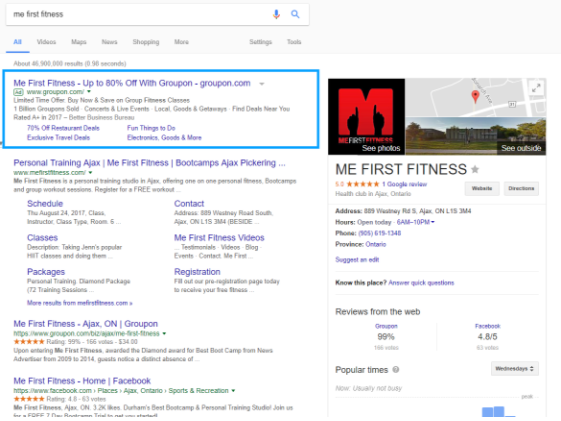 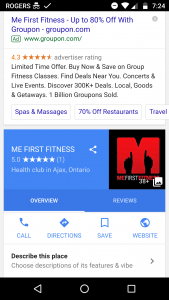 I noticed the exact same scenario for a third business that I looked up on Groupon, Putting Edge. 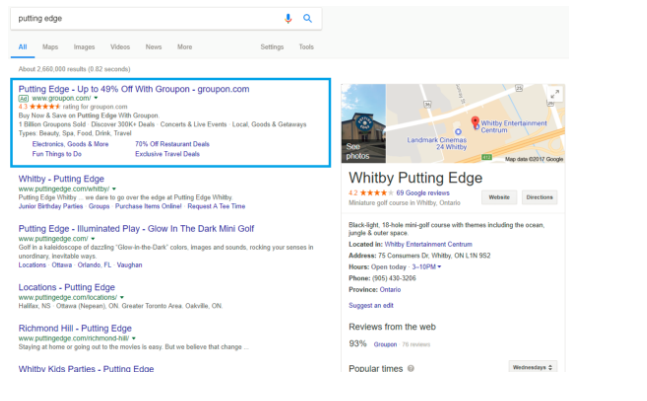 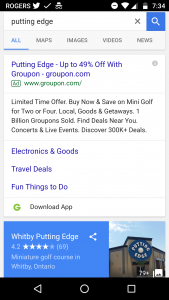 It’s also interesting to note that in the first two examples, the Groupon site is ranking in the top three organically, and in the top ten for the third example. And in all three examples, Groupon is being pulled into the “Reviews From Web” in the local knowledge panel.

The fact that Groupon is basically dominating a branded search for these businesses is going to be a positive thing for some businesses and a negative thing for others. It really depends on each business’s marketing strategies and goals. What’s important to take away from these observations goes back to the original point. Google owns Google. And the next person who Google cares about is the user, not your business. So, just because you have a GMB listing and you are bidding on AdWords, doesn’t mean you own your listings and control how the SERP’s look. So make sure you set aside time each month to analyze your listings and the SERP’s for your brand name. You may not have full control, but at least you can be as knowledgeable as possible and work on optimizing Google’s homepage.

What do you think of Groupons tactics?  Leave a comment and let us know.