Over the years Google My Business (GMB) support has evolved from being virtually non-existent to something that has become very useful for solving most types of GMB issues. Looking at the evolution of the ways that you can contact GMB support alone is a testament to the attention that the GMB product is getting and the progress that they have made.

One of the more interesting things that have come out of the evolving support team is the instances of interesting “ranking advice” that support reps give out.  I started collecting examples of advice that seemed to come up over and over again and share some of the advice in this blog as an educational resource. Whether you are taking advice from an SEO expert or Google, you should always be testing things for yourself to know what actually works.

For anyone not familiar, “Labels” inside of GMB is a simple way to “organize your locations into groups” within your dashboard. 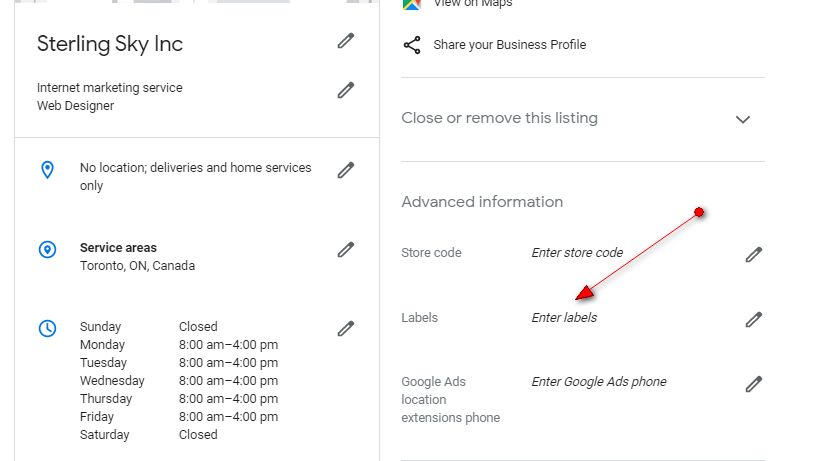 For some reason, the GMB support team has suggested that adding keywords into this section can boost rankings. The Local Search Forum has a thread where examples of this advice were reported by a few users.

“I was talking to GMB support the other day and the technician seemed very clear that labelling according to the business key terms would provide ranking benefit. I said to him that I just couldn’t see that being the case, but he insisted. I think it’s a case of him not having a clue, but decided to share here in case anybody had any extra input?”

“I was also talking to a GMB support person today, in India, and they told me to add my keywords into the labels area and it would help to get indexed in maps for my keywords and would show up within 2 weeks.”

“Today, a GMB support person in India told me the same thing about adding keywords to the Labels section.”

Has anyone tested this out before? I would put my life savings on this one having zero impact.

2.  Edits to Your GMB Resets Your Listing

This advice in the form of a warning was given to Darren Shaw.

A rep from @GoogleMyBiz phone support told one of our clients that every change you make in your GMB dashboard sets your Google listing back to the beginning/zero/the bottom and you have to work your way back up. Can someone from Google Support please set the record straight?

Hey Darren! The major changes to the business info may affect your ranking, but we cannot confirm if it can bring it down drastically. We suggest you to go through this link for more info: https://t.co/P1GJeJLsej. -Mark

Bottom line is that making edits will not cause your GMB listing to start over in any shape or form. With that said, careless edits to your GMB categories, website URL, name, address, or phone number (NAP) can impact rankings.  However, we’ve seen that even after a hard suspension reinstatement, a listings rankings will return to their former glory.   Therefore, a simple edit certainly isn’t going to cause you to start over.

3.  Unverified Listings Go Away on Their Own

This piece of advice has only come up once as far as I know so it may have been a case of misunderstanding the vast amount of nuances that exist within the world of Google My Business and Google Maps. Here’s the transcript where I was told that unverified listings automatically get removed from Google Maps.

It is true that marking a listing as closed will cause that listing to eventually (in our experience this takes years) fall off of Google Maps. However, simply removing a listing from your GMB dashboard will not have the effect that this support rep suggested.

4.  Close Your Current GMB Listing When You Move

When a business moves to a new address the correct process is to update the address on your existing GMB listing. There was a time, several years ago, when Google was suggesting that a business create a new listing and mark the old one as closed. But that suggestion has been dead for years. However, it seems that GMB support is still offering this up as advice. See this thread at the Local Search Forum for an example.

“I’m waiting for GMB Support at Twitter to get back to me but wanted to check here first.
In February I relocated my office within the same city. Nothing else changed, same phone, email, website, and same services provided (I’m a therapist). Someone at GMB told me I couldn’t change the business address on GMB, but would have to mark old page as permanently closed and create new page for new address. When I did this there was a massive drop in ranking and consequently less inquiries. Recently I discovered this was bad advice. Contacted the chat service at GMB, the person there didn’t seem to understand my issue but advised to reopen the old page and he/she would then move or merge it. However I heard no more after reopening the old page. So I now have two GMB pages with slightly different business names, different locations in the same city, same email website and phone. Page A has much better ranking, page B has correct present location, both have some good reviews which I want to keep.”

Pretty messy, eh? Unless you want to lose rankings after a move please do not follow this advice.

On September 3, 2019, Google announced that it was removing the option to set a distance-based service area. On November 5, 2019, Google announced that service areas are now limited to twenty service areas per business. Sometimes the new guidelines don’t make it to all the GMB support reps right away. On November 8, 2019, someone tweeted that a GMB support rep suggested that if there are “more than 20 service areas for your business, designating the service area in kilometers is recommended”. I’m guessing they didn’t receive training on either update?  The only correct part about the advice given is the use of “kilometers” which is the correct way to measure distance ?(Yes, I’m Canadian). 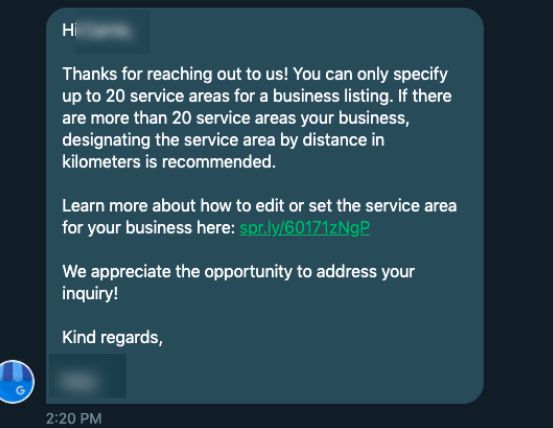 Not all of the advice we collected made the final cut. Here’s a sample of some honorable mentions.

“Try not to make regular edits on the listings.”

“Because, when ever you make any edit on the listing, it loses some of its popularity every time it is coming back to active state from pending pending.”

“You just need to be more active on your business page”