In the 2021 Local Search Ranking Factors Study, there was a clear trend that stuck out. In the commentary, people listed spam-fighting as both an ‘effective strategy’ and a ‘strategy that doesn’t seem to work anymore’. Wait, what? It might make you wonder if you should be prioritizing reporting spam anymore.  To help answer these questions, I’m going to be sharing some details from a recent study we conducted at Sterling Sky.

For this study, over a four-year period, we looked at 5306 listings, across 16 different industries, that were ranking on Google.  Our goal was to try to answer a number of questions about how effective spam-fighting really is and if spam is still a problem on Google.  In this study, you’ll see us using the terminology “fake listing”.  We define a “fake listing” as a Google Business Profile (formerly Google My Business listing) that was created and violates Google’s guidelines, thus they removed it after it was reported. 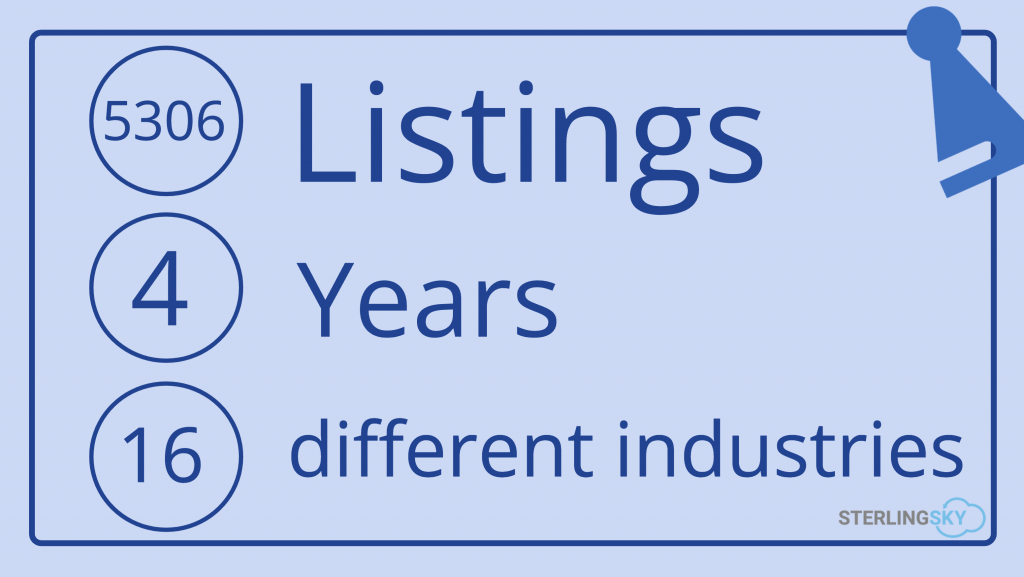 What Industries Have the Highest Percentage of Fake Google Listings?

The first thing to note right off the bat is that people’s mileage may vary when dealing with spam due to how drastically different it can be across different industries.  This graph looks at the total number of listings we looked at in each industry, and what % of those listings were removed from Google for violating their guidelines. 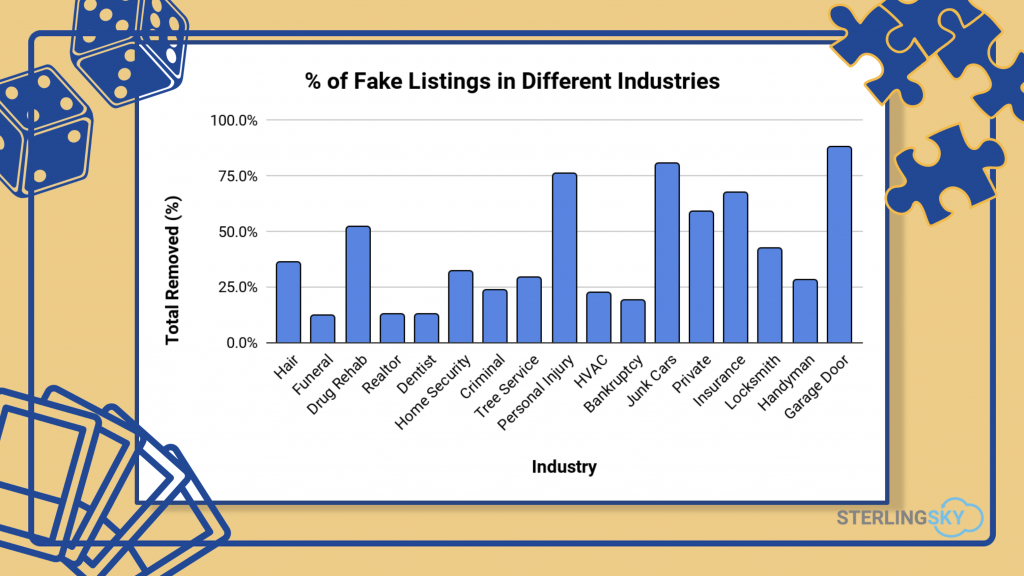 Is Spam Declining Compared to 3 Years Ago?

According to Google’s numbers, they removed 7 million fake business listings in 2021.  This number was 2 million in 2017 and was 3 million in 2018.  630,000 of the listings they removed were ones that users reported to Google to remove.  That number has grown from 250,000 in 2018. So, not only is Google preventing more people from attempting to create fake listings, but more users are actually reporting fake listings too – compared to a few years ago.

How many fake listings you find in a single market or industry can really vary based on how big of a market it is.  Here is an example of how it looked for the junk car industry, in a large city, over the last few years: 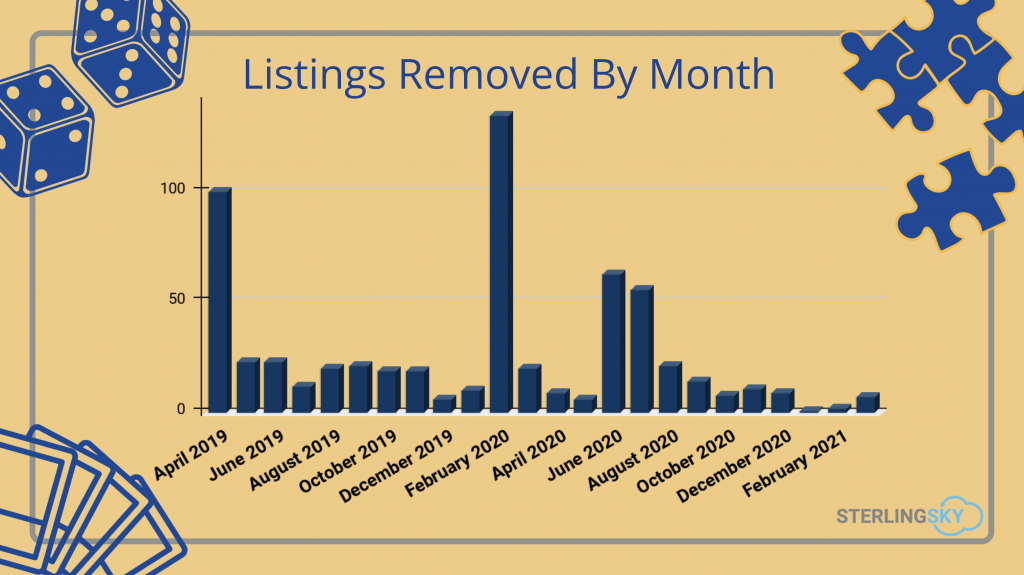 Here is how it looks for a few other industries, by year, according to our study: 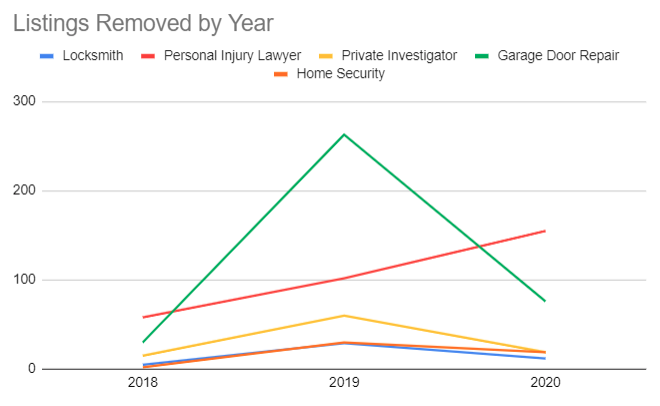 There are some industries that have actually improved drastically in the last couple of years.  For example, the fake listing network that plagued the personal injury lawyer industry in 2019 actually got mostly removed from Google and they have now moved on to Bing.  Just search “car accident lawyer [insert city]” on Bing, and you’ll get results like this: 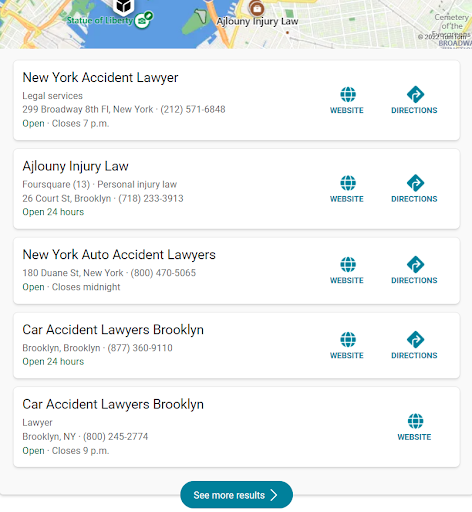 However, Google has not solved the huge lead-generating networks for other industries, like the garage door repair industry.  Fake listings are still a massive problem in this industry and fake listings, like the ones below, are constantly popping up with fake reviews on them.

How Big of a Problem is Keyword Stuffing? 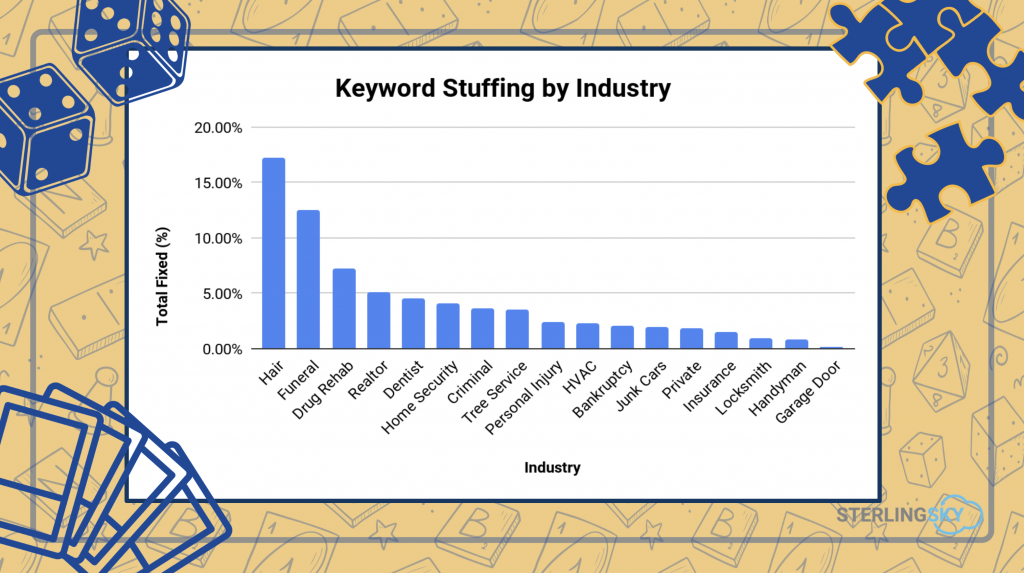 Often we found with keyword stuffing businesses, it would take several attempts to get Google to fix the issue

What patterns are you seeing with spam on Google Maps? Share with us in the comments below.