Wondering how to make your Google posts perform better? In this case study, we wanted to find out what types of posts performed the best and manually analyzed over 1000 posts from a variety of different small businesses. For the full video of this presentation plus several others, check out our videos on demand from LocalU in April. In this study, we looked at both clicks according to Google My Business (GMB), and clicks and conversions inside Google Analytics (by using UTM codes).

Guide to Google My Business Posts:

If you want your posts to perform better:

There are 4 different Google My Business post types that you can use in the GMB dashboard:

This is the newest post type and is different than the others because it shows up way higher in the knowledge panel. 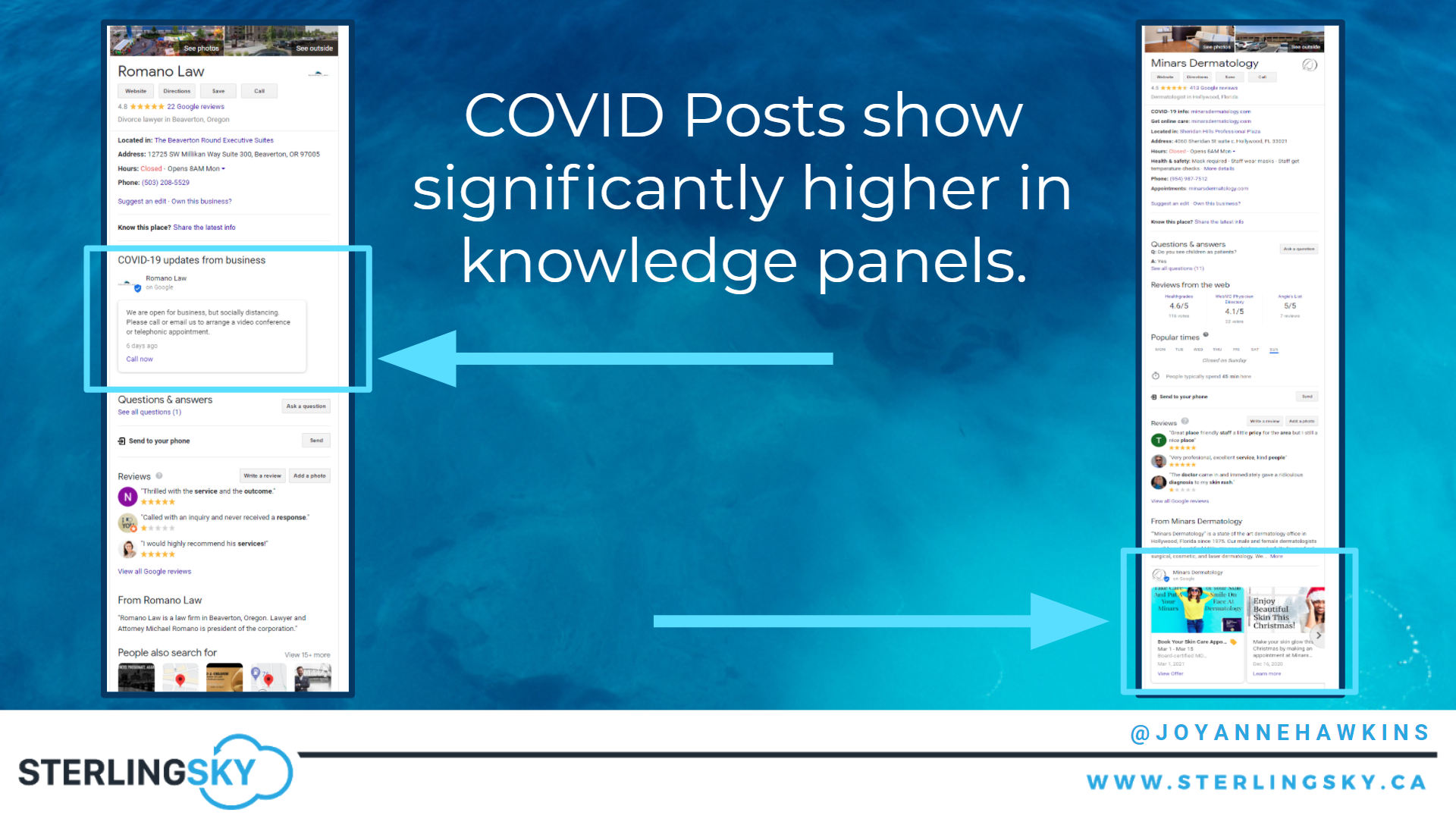 This post type is text-only (no image) and actually replaces your posts carousel so if you use this type – don’t bother making any other posts as they won’t show up anywhere. The posts stay live for 28 days and then disappear. It also gets displayed prominently on the Google Maps app unlike any other post type. 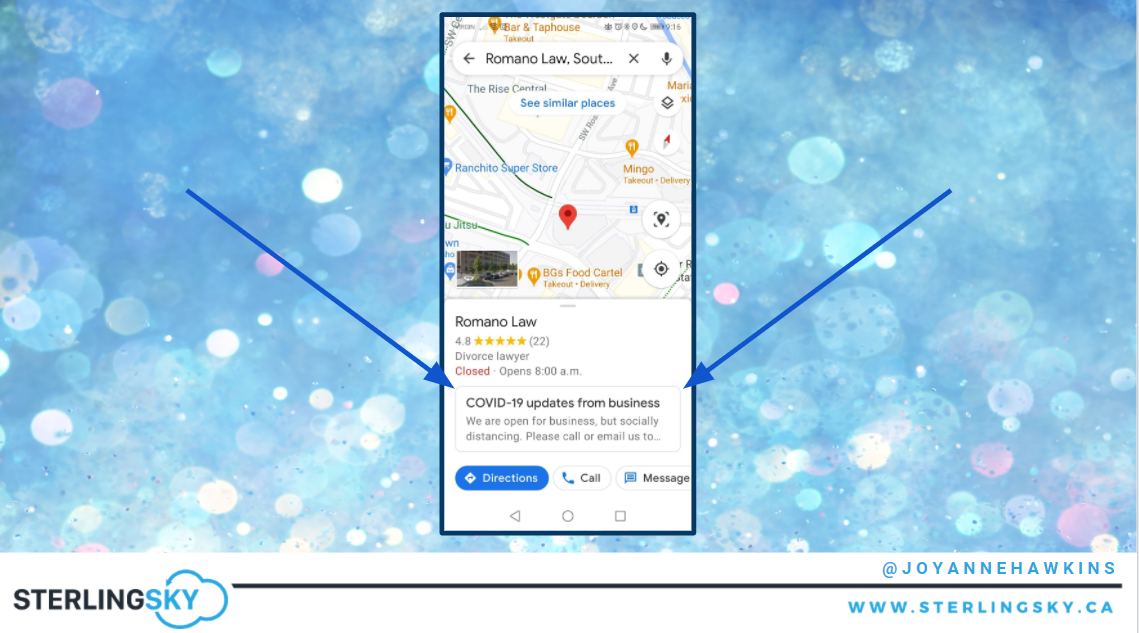 These are posts that allow you to set a date range for how long you want the post to stay live.

These look similar to event posts but contain a tag icon and a “view offer” call-to-action. They also let you set the date range that you want the post to stay live for. 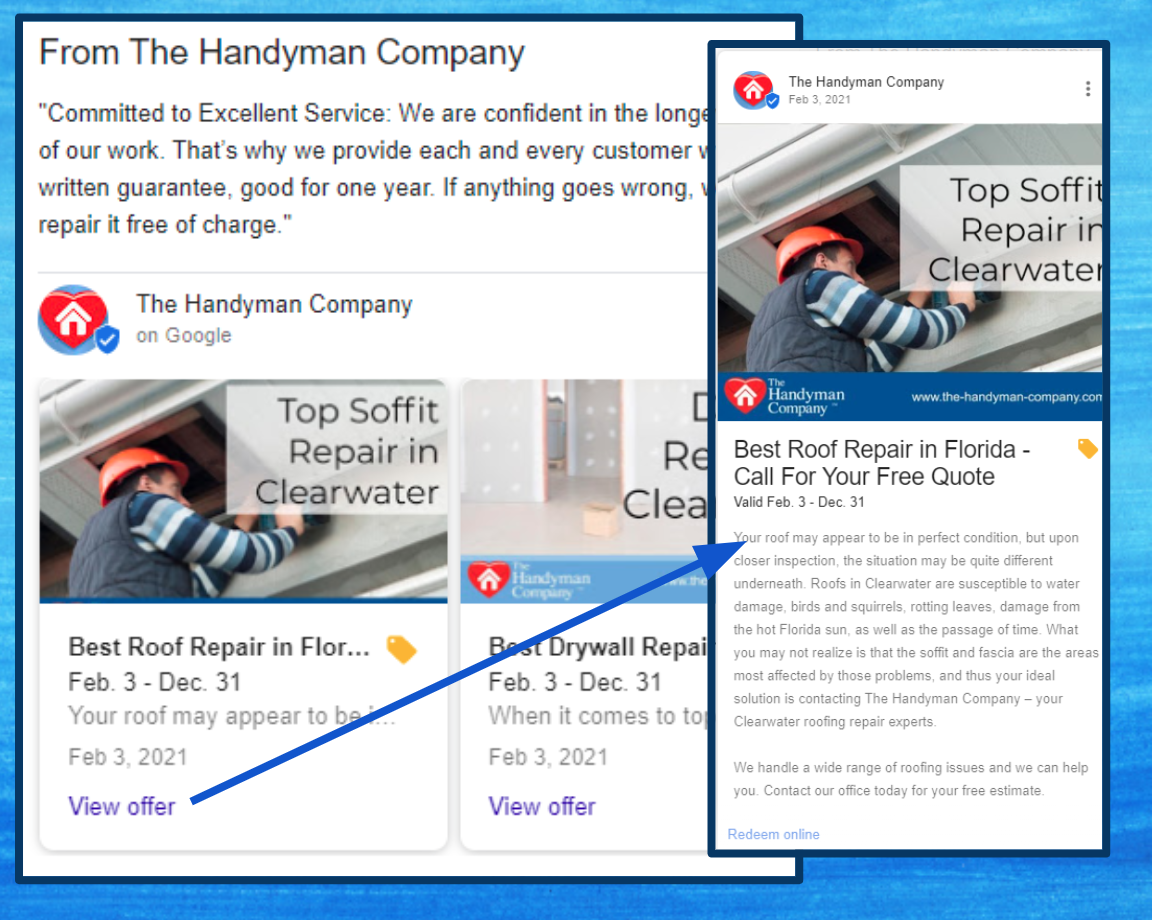 This was the default/original post type and historically used to stay live for 7 days. This changed in January 2021 and now the posts stay live on your knowledge panel for 183 days (6 months). After 6 months, they get hidden under a little “view previous updates” link as shown below.

When we measured the performance of the 4 different post types, the two types that performed the best were COVID posts and offer posts. The worst-performing type was the update post type.

Should your Google My Business Posts have titles? 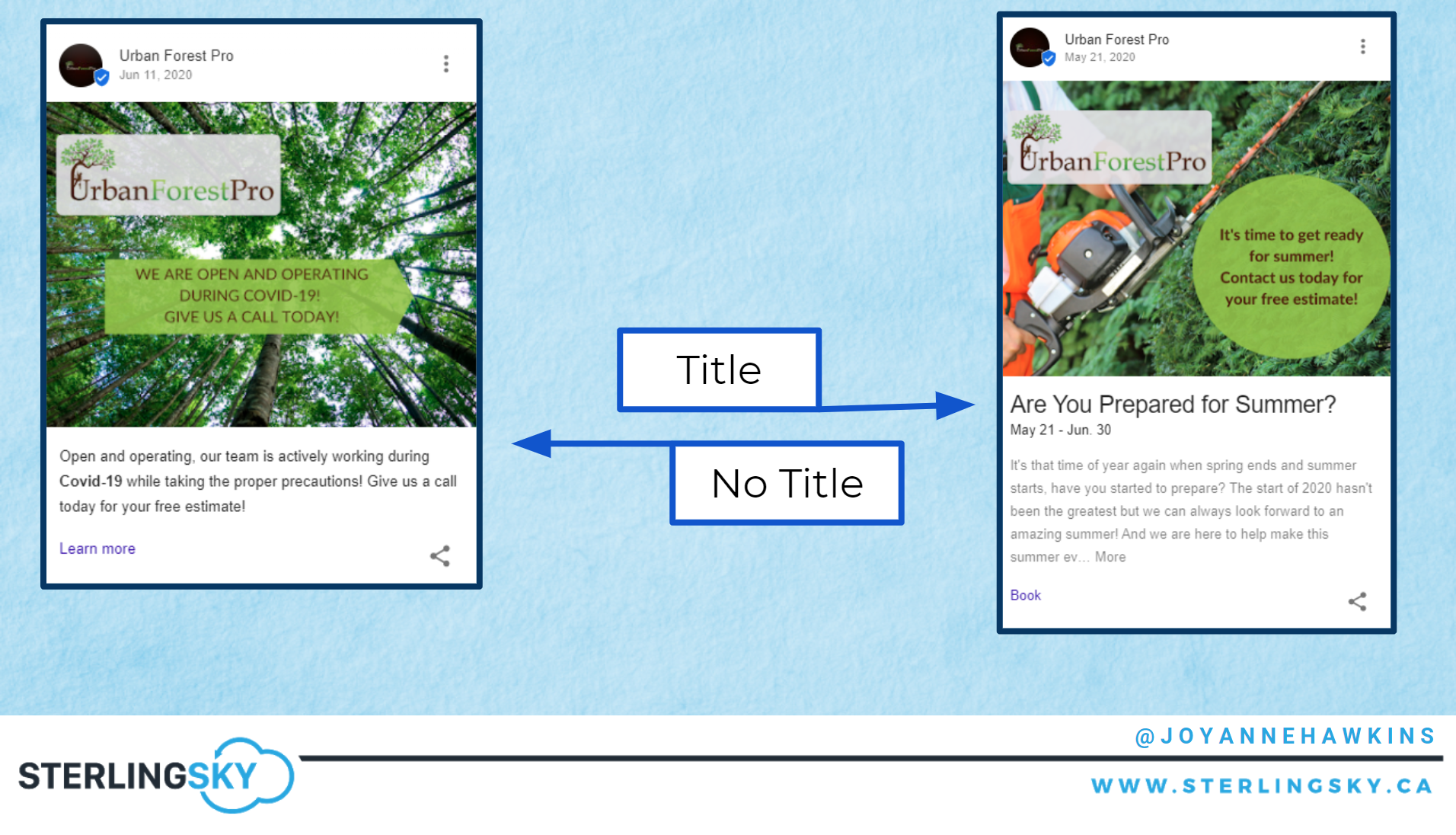 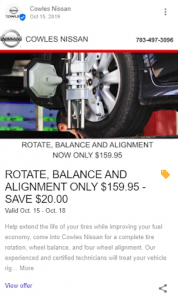 If you do include a title, make sure it is not in all-caps. We found that posts that had normal capitalization for the titles got almost twice as many clicks.

Another thing we looked at in the study was if posts that contained emojis, outperformed posts without them. 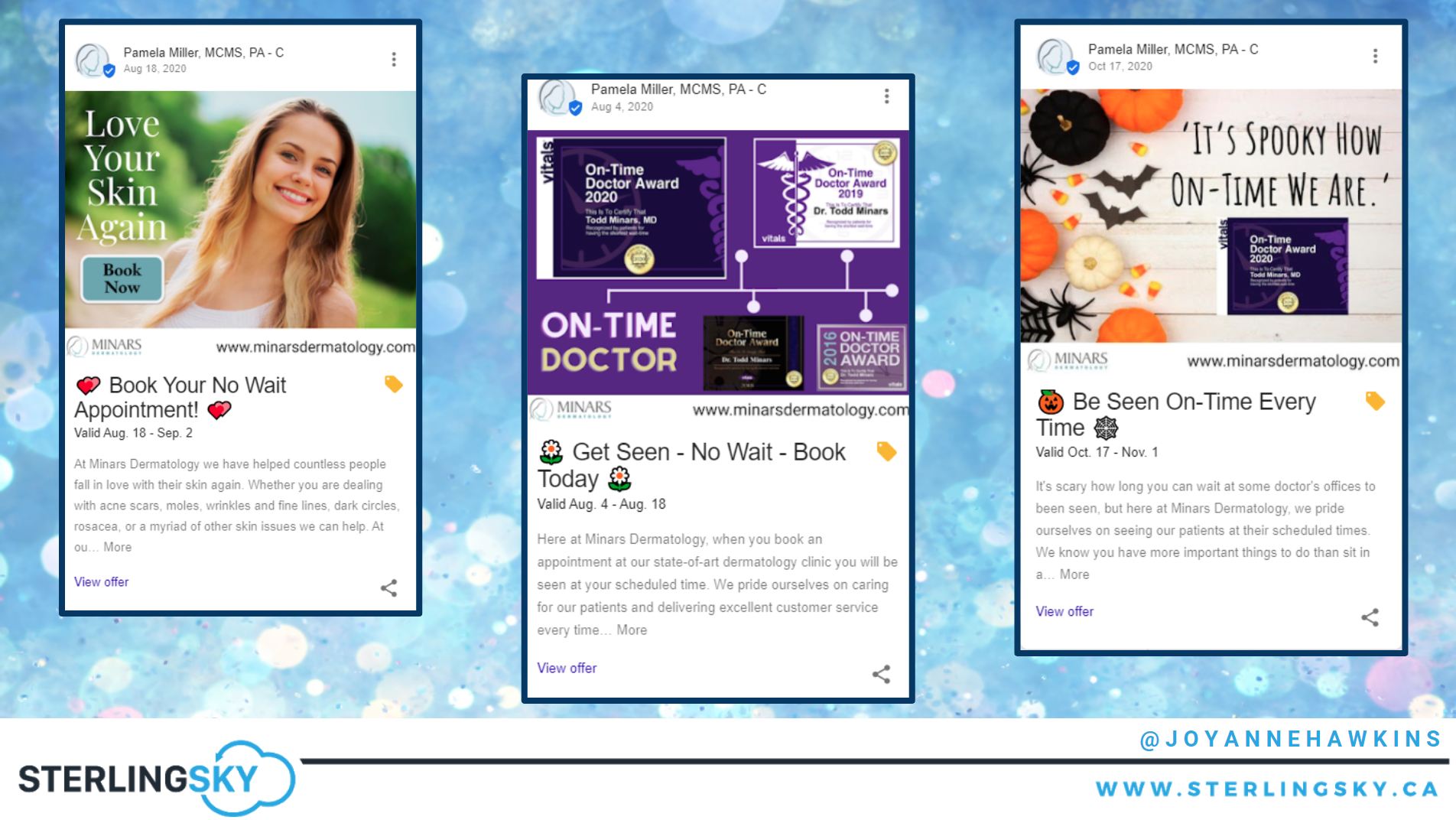 Posts that contained emojis got twice as many clicks according to Google My Business insights and also got more conversions.

What to include in the GMB Post’s image

The first thing we looked at with images in posts was if text in the image itself performed better than images without text. 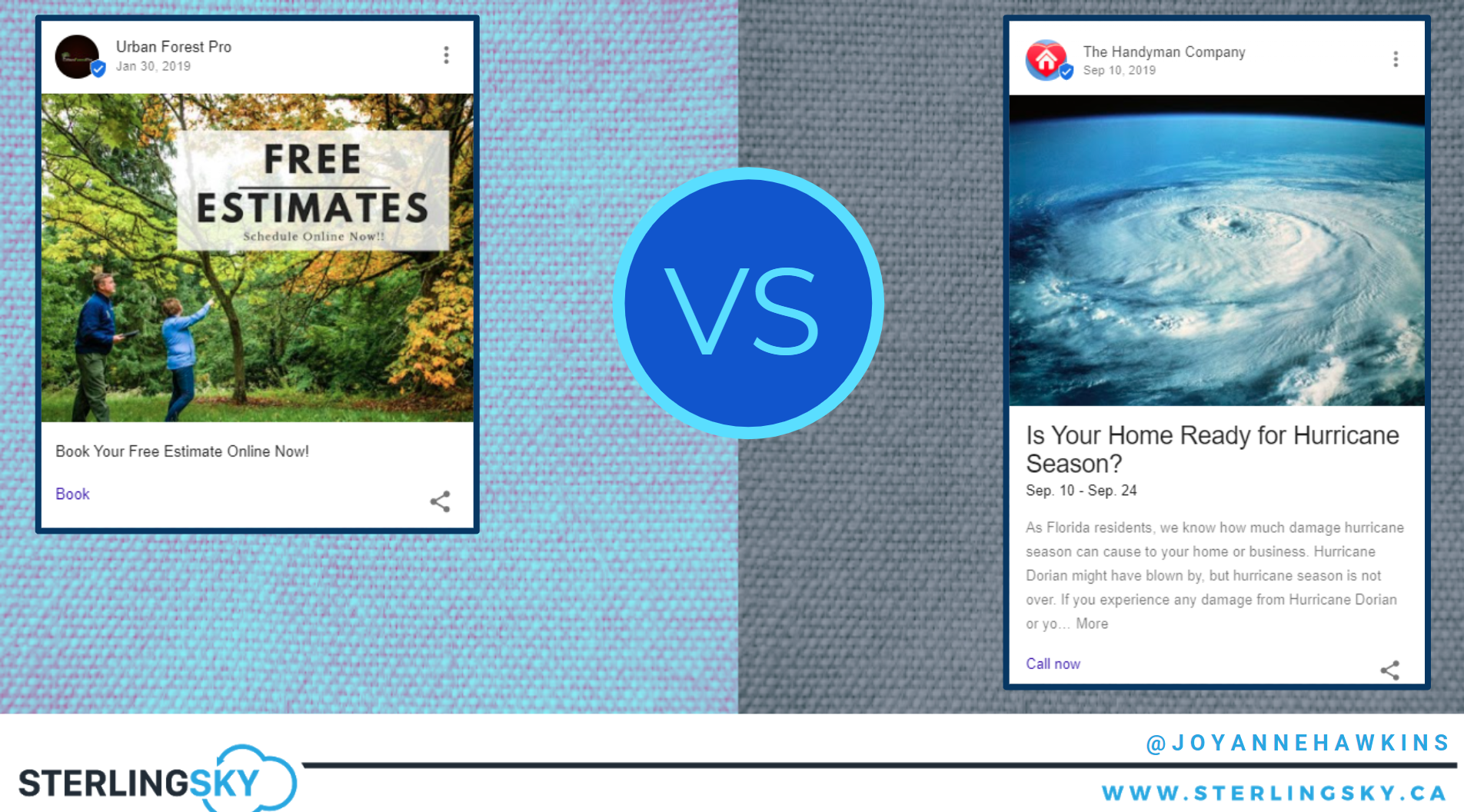 Photos that contained text in them got almost 4x the clicks compared to photos with no text.

Next, we looked at if the photo contained a logo. 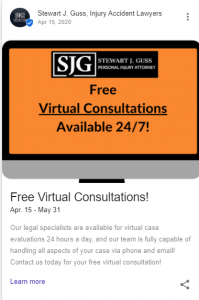 For this one, we saw no measurable difference between the posts that contained logos vs the ones without.

Finally, we wanted to see how stock photos compared with unique photos that had been customized. 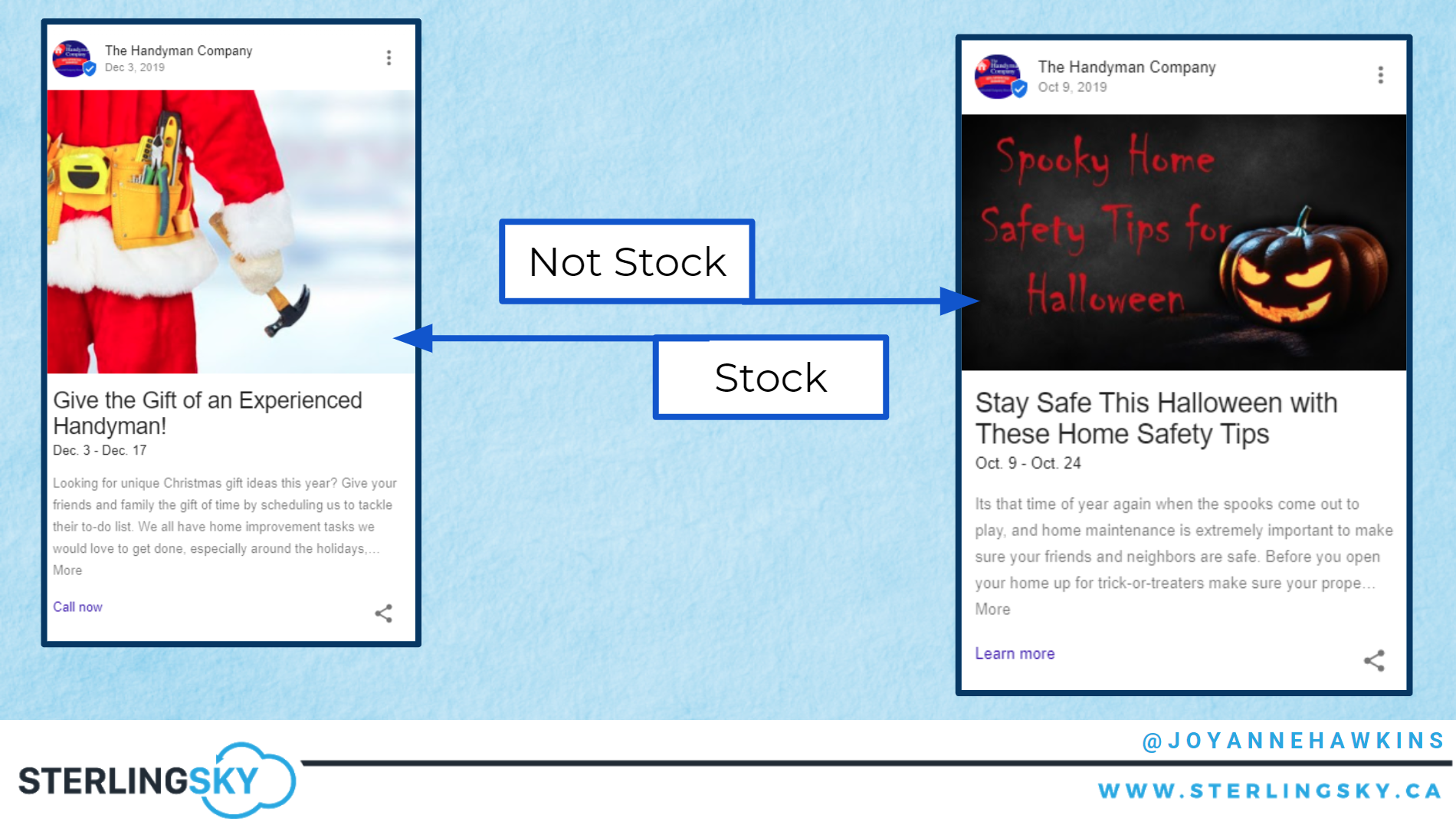 We often get people asking what types of content they should include in their Google posts. For this study, we broke out the types of posts into several categories.

The GMB Post types that got the most activity were:

The full list of categories is listed below. Posts could fall into multiple categories if they applied.

For the full video of this presentation plus several others, check out our videos on demand from LocalU in April, 2021.