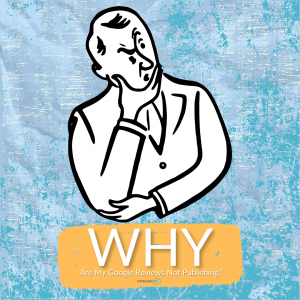 If you are a business that is frustrated by Google not publishing your reviews, you are not alone.  We are seeing more and more reports of businesses that are complaining about missing Google reviews or reviews not publishing when customers post them.  In this example from the forum people describe getting told by their customers that they left a review but it simply never shows up live on Google.

Jump To: hide
1) Why Are Google Business Reviews Missing?
2) Google’s Review Filter is Getting Stricter
3) What Causes Google to Filter a Review?
4) Can Google Publish the Missing Reviews?
5) Contact Sterling Sky Inc.

Why Are Google Business Reviews Missing?

If your reviews are missing from your Google Business Profile, one of two things is happening.  The first option is that Google removed them manually because they violated the guidelines. This is unlikely and doesn’t happen often.  The second option is that Google’s automated review filter is catching them and removing them.  Google’s review filter looks for patterns that are unnatural and removes reviews that fall into those patterns.  When reviews are filtered, usually the individual that left the review can still see it, but only if they are logged in while viewing the business profile.

Google’s Review Filter is Getting Stricter

Mike Blumenthal of Near Media has been tracking this trend and the following graph shows the increase in threads over at the Google Business Profile forum in 2021 for the topic of missing reviews.

A recent study done by Uberall found that of the four platforms examined, Google had the highest average percentage of inauthentic reviews across business categories (10.7%). Next in descending order were Yelp (7.1%), Tripadvisor (5.2%), and Facebook (4.9%).  While tightening the review filter might be Google’s attempt to solve their problem of fake reviews, it is clearly missing the mark. Jason Brown from Review Fraud agrees:

“The Buffalo Wild Wings in San Jose has been getting prank reviews mentioning beans. The prank was initiated on TikTok and the poster asked people to ask for beans for their meal. Several reviews started pouring in mentioning beans. While this case was privately escalated to Google, the reviews team wasn’t able to remove all of the bogus reviews.

The same is the case for Deal’s Plumbing. They received 18 1-star reviews within 36 hours. This case too was privately escalated to the reviews team. Yep, you guessed it, no abuse was found so the reviews won’t be removed. A similar incident happened to Precision Driveline and Diesel Emissions Service in Portland. Both business profiles received negative reviews from the same 4 profiles. Again, Google didn’t see any abuse, and the reviews remain.

Google also can’t seem to spot and identify review networks either. Curtis Boyd created the Transparency Report Chrome extension which can find and detect review pods. An independent tool is able to see that these reviews are fake, yet Google can not.”

What Causes Google to Filter a Review?

I have personally analyzed a lot of cases of missing reviews and have found some patterns that often lead to reviews not showing up.  Here are the top 3 most common reasons:

If none of those reasons apply, Google simply doesn’t have enough information about the user or they think the review violates their guidelines.  They don’t always make it super clear as to why reviews get filtered.

Can Google Publish the Missing Reviews?

If you have legit customer reviews that are being filtered, it’s worth asking on the Google Business Profile forum to see if Google can reinstate them. When you post a thread, make sure you include the details of your business along with the following information:

While Google doesn’t reinstate every case that we send through there, I am seeing them reinstate some.

If you’re a local business that needs help with your Google My Business listing, review strategy, or online presence on Google and other search engines, at Sterling Sky we can help. We offer SEO audits, consulting, or monthly local SEO services. Contact our office today for more information.

How Do I Contact Google Business Profile Support? (Formerly Google My Business)

The Vicinity Update: What You Need to Know About Google’s Largest Local Algorithm Update in 5 Years

On December 8th, one of our forum users asked about some serious differences they were…

🔥ICYMI: Does the Length of a Google Review Matter?
"We wanted to ...determine if a longer review (a larger word count) would stay at the top for more time than a shorter review."
🗒️Check out this blog post from @JoyanneHawkins!
https://www.sterlingsky.ca/length-google-review-matter/