If you’re a small business owner, you’ve probably experienced this on one or more occasions: You’ve received a negative review from someone who isn’t your customer.

So, what do you do now? In most cases, nothing.  Although you may think this sounds hopeless, I can assure you it’s not.  There are a few circumstances when Google will act and remove the review so if any of these situations apply to you, reach out to Google to start the review removal process.

When Google Will Likely Act

I want to clarify that I said “likely” because as most of you know, very few things with Google are absolute and depending on who you speak to you might get a different answer. But from our experiences, these 3 circumstances has resulted in Google removing the review(s):

While extortion for a negative review is rare, it does happen. A business owner we were assisting on the Google My Business forum, had a “reviewer” demand $600 for them to remove the negative review. When the business owner refused, the price went up to $1000 and they edited the review to make it worse.

When dealing with extortion, you need to show Google proof that you’re being extorted. Screenshot all texts, emails, etc. so you can send them to Google to prove that the review is fake.

If your business is being attacked publicly and you can find proof, send it to Google. A few years ago an American dentist made headlines when he shot and killed a lion while on safari in Africa. We use this example a lot because shortly after this his Google My Business (GMB) listing was bombarded with negative reviews from people all over the country. Google removed these reviews since it’s clear that they have nothing to do with the business.

While the first example was extreme, this also happens on a smaller scale. An unhappy customer of this business sent out a Tweet asking people to spam a business with negative reviews. Just like with extortion, you need to be able to show Google proof so if you find something like this online, take screenshots!  Just linking to the Tweet might backfire on you if the user decides to delete the Tweet.

If a disgruntled ex-employee posts a negative review, you can report it using the following as proof:

Again, make sure to take screenshots and send those to Google.

The one scenario where Google won’t act is when a user leaves a rating without a review. It doesn’t matter whether their “in your system” or not, Google needs proof and without an actual review, there’s nothing to work with 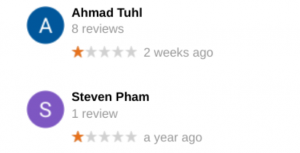 These ratings appear at the bottom of the list in GMB, so your real customers are less likely to see them. And on mobile, ratings with no review text don’t show at all, so no one will see them there. 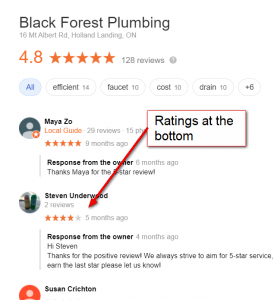 The notion of negative reviews helping your business shouldn’t be taken out of context here.  I’m not encouraging business owners to provide poor service in order to get some bad reviews on their listings.  Instead, what I’m saying is that most consumers are smart enough to understand that it’s impossible for any business to completely satisfy every customer.  A study by Power Reviews found that “A consumer is most likely to purchase a product when its average star rating is between 4.2 and 4.5 stars. Why? Because a perfect 5.0 rating is seen as too good to be true. An average star rating of 4.2-4.5 stars, however, is seen as more transparent and balanced.”

It’s All About Balance

At the end of the day if you’ve received a negative review from someone who isn’t your customer and it doesn’t fall into a “likely to remove” category, don’t stress!  Just keep providing your real clients with the same excellent service and your real positive reviews will help your business maintain a “balanced” review rating.

Nikki has been working in the Local SEO industry since early 2014. She is passionate about helping small businesses and uses her ever growing knowledge of the industry to help them succeed. Nikki has a Business Management degree from Ryerson University, where she majored in Marketing.

See all of Nikki's Articles       Follow Nikki on LinkedIn

Review & Service Attributes: Do they affect how long a review stays at the top of a listing?

As we continued our case study into reviews, the next item we analyzed was the…

Does the Length of a Google Review Matter?

In our last blog post, "Is Google Looking for Diversity in Reviews," we presented a…

Have you found that you have been getting reviews filtered by Google? Here... are some handy steps to try to get them to show on your GBP/GMB profile. #seo #marketing #sterlingskyinc @JoyanneHawkins