Mordy Oberstein tweeted to me this morning about his observation that Mt Everest has been plagued with dozends of fake reviews.

I think Google has a fake review problem when it comes to Earth’s most famous landmarks. Here’s one for Mt. Everest & despite some of these being hilarious, they are of course fake.

Same for the world’s oceans for which any reviews make no sense. @rustybrick @JoyanneHawkins pic.twitter.com/8ullnLUK1y

Some of the reviews are somewhat humorous:

“When I got to the top of the mountain i thought there would be a hot tub… but alas there was none soooooo… one star.”

“Fantastic sledding experience! Had so much fun racing down the small hill with my friends and we all tried our best in it.
The only sad part causing this 4 star rating is that I lost my friend Greg down the track.. If you are going there for a morning run and see Greg looking for us, please let him know as we would love to have him back. P.S. When you reach the peak, on the right balcony with the view towards the track you can find a Starbucks Cafe but the coffee is served cold :(”

“While climbing up here my guide left me for a sexy polar bear so im all alone up here please help, my feets are blue and i had to eat my last wafer bar.”

However, some could definitely be seen as offensive:

“I got scared at first by the news that people get died along the way going to the top. And I thought it will be difficult to climb it.. but it was like eating peanuts. The top of the mountain is superb! Ethereal! Though I’ve seen gross scenery on top of it. Some of the Hollywood stars are making out on the top.. And a well known president too. I’ve got a video. *smirk* All in all, the trip was all worth it. I highly recommend this place and will surely go back together with my crippled friend.”

“Great View, but a bit exhausting, it’s a shame that it’s not more wheelchair accessible. I would have rated it 5 stars but there were very limited bathrooms. And only 4 rest stops.”

“I would suggest to enjoy this place with old people who have arthritis. The Nepali Scientists have recently come up with the discovery that cold weather and high altitudes are highly beneficial for treatment of arthritis. They even got the ding-dong-bell prize for Medicine.”

The saddening thing is that the reviews have been there for months, unfiltered and getting lots of views and likes.  Even the really-obvious exact duplicates didn’t get hit by Google’s review filter. 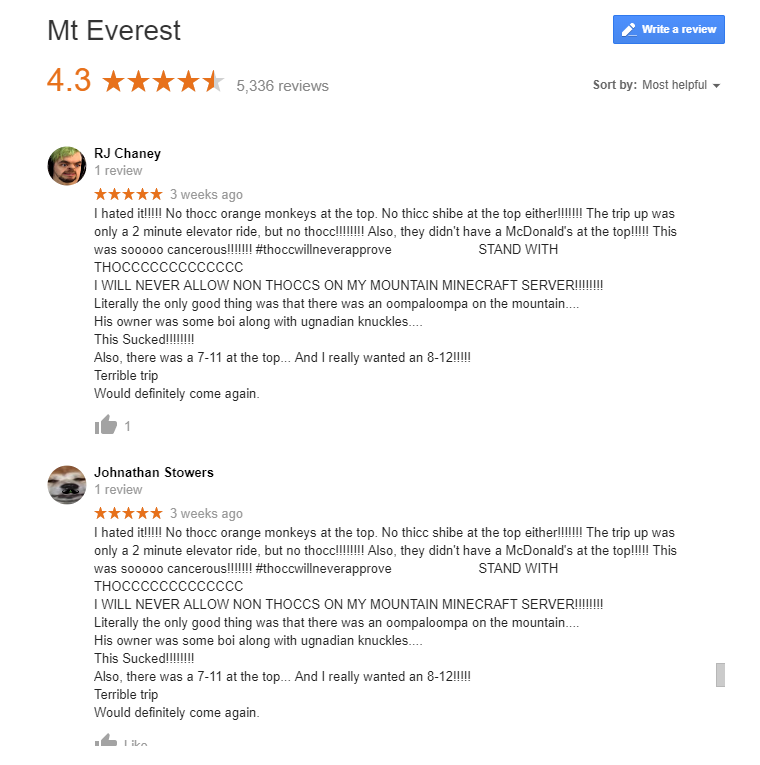 There were similar reviews left on the listings for the Atlantic & Pacific Ocean: 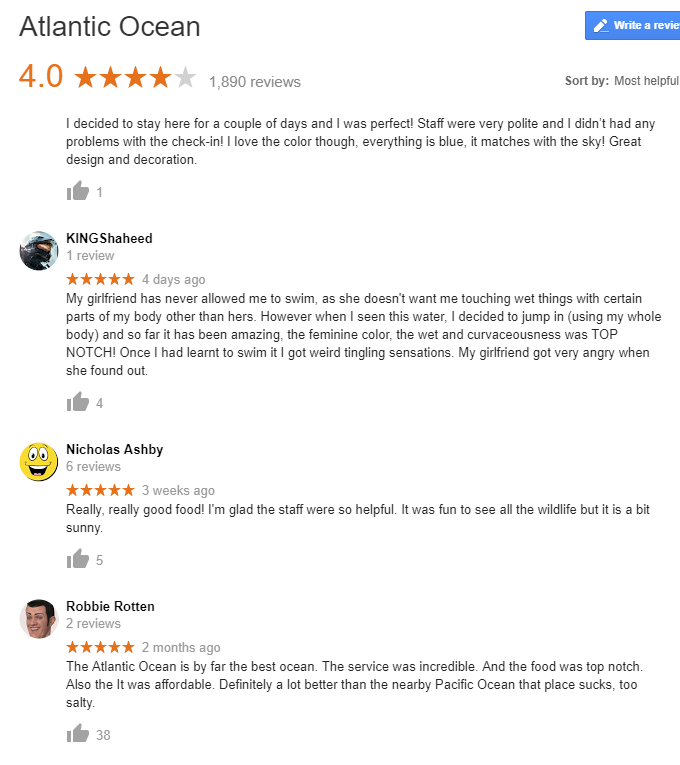 I already sent it to Google so I’m sure the reviews will get taken down.  That’s not the real problem here.  The issue is that after the reviews are removed, there doesn’t appear to be anything stopping people from just doing it again.  I periodically check Walter Palmer’s listing. He was the dentist that killed Cecil the Lion three years ago and still gets blasted with negative reviews.  Here are some left in the last few weeks:

“I went in for a root canal. Dr Walter Palmer asked me if I wanted nitrous to calm me down. Suddenly, he restrained my arms and legs and became excitable and more animated. He leaned down really close to my face and asked me have I ever read “The Most Dangerous Game?!?!” His eyes were wild and he licked his lips. The hygenist looked away- she must have been used to this charade and threatened as well. He said “I’ve become tired of hunting defenseless lions and now I’m going to start hunting defenseless humans!” The veins on his neck bulged out as he grabbed a scalpel. I tried to scream but he turned up the nitrous so I slowly started passing out. Finally, I awoke from my horrible nightmare. I wasn’t in his office of terror but safe in my bed. I would never trust my dental care to this savage.”

“This sick bastard not only murders lions but also leopards and rhinos. And pays a lot of money to do so. Spend your money on a dentist who won’t use it to murder animals on protected land. I hope you rot in hell.”

“Worst dentist ever he’s more of a butcher than a dentist. My fillings all fell out!” 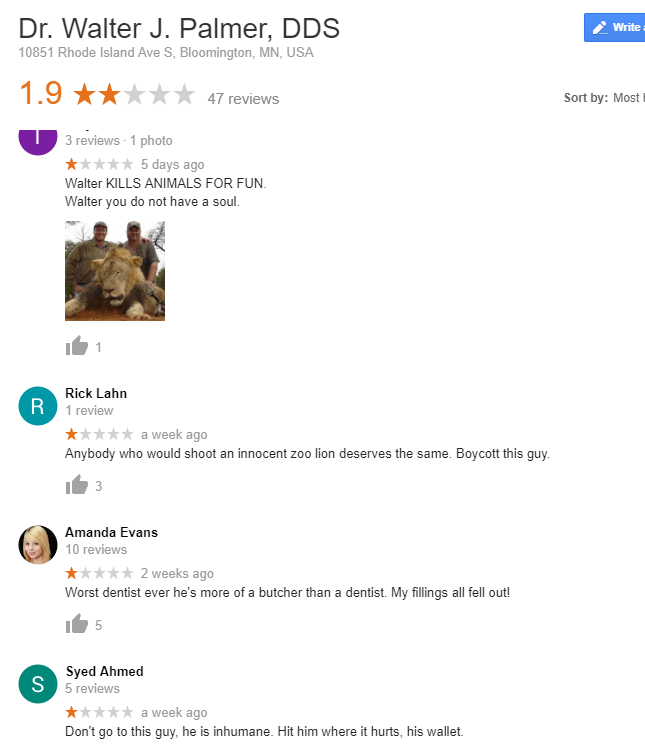 Similarly, Donald Trump’s hotels & properties get plagued with negative reviews all the time. This user has reviewed several of them:

There is also a word-for-word replica of the first review that is also sitting there currently, published, and unfiltered: 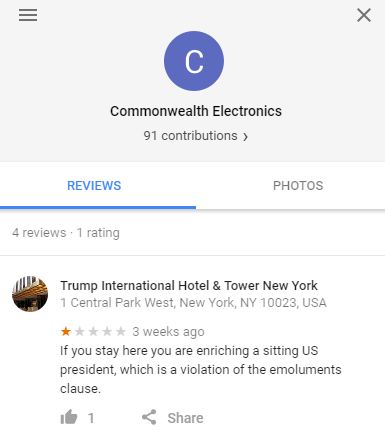 Maybe one day fake reviews won’t be a big issue on Google but I’m not holding my breath.

What is the Effect of Leaving Photos with Google Reviews

As we near the end of our case study on reviews, this next bit of…