Getting your Google Business Profile (GBP) or Google My Business (GMB) listing suspended can be frustrating because unlike many of the normal penalties Google gives out, with Google doesn’t tell you what you did wrong.  It’s also possible that Google wasn’t even the one to trigger the suspension since any Google user can report a listing on Google Maps and, depending on the trust level of the user, it is possible for them to have your listing removed.

Jump To: hide
1) Two Types of Suspensions
2) How Do I Know if I Have Been Suspended?
3) The Top 5 Reasons Why Listings Get Suspended
4) Why Does Google Suspend User Accounts?
5) Do Suspensions Impact Ranking?
6) Why is Google Business Profile Support Telling Me to Create a Duplicate When I Got a Suspension?
7) Should I Recreate the Listing?
8) How to Avoid Suspensions
9) Filing For Reinstatement

The first type of suspension is what I refer to as a soft suspension.  If you’re talking to Google, they refer to this as a listing being “disabled”.  This is when you log in to Google My Business and see the “suspended” label and no longer have the ability to manage your listing. However, your listing still shows up on Google and Google Maps. You should be able to see it if you search by name and all your reviews will be attached to it.

In this case, the listing has really just become unverified. Since you broke Google’s guidelines in some way, they have removed your ability to manage the listing.  However, the listing’s ranking is rarely impacted. I once worked with a locksmith who ranked first in a major metro area; even after his account got suspended, his ranking didn’t decline.

Hard suspensions are much worse because it means the listing itself has been removed from Google Maps and the reviews generally disappear with it. Hard suspensions can be triggered due to:

If you receive a hard suspension it’s because Google, or a user, has decided the business is not eligible to be on Google Maps and therefore the listing shouldn’t exist. I have also seen Google issue hard suspensions due to repeated violations of Google Business Profile guidelines.

Some examples of what would cause a listing to receive a hard suspension include:

Certain industries, like locksmiths, receive way more suspensions than others.  I assume that the filters on what triggers a suspension algorithmically vary based on how spammy the industry is.

How Do I Know if I Have Been Suspended?

As of July 13, 2020, Google is now sending out notification emails to owners and managers of a Google Business Profile that gets suspended. 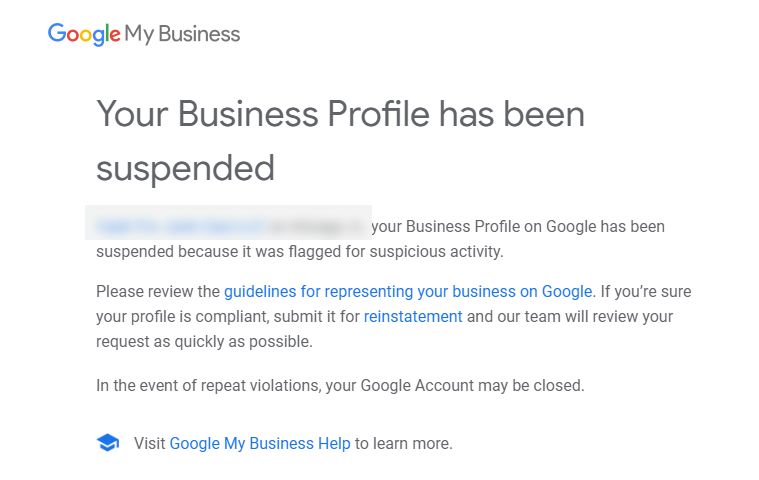 Greg Sterling wrote about the reason behind these notifications in this Search Engine Land post.

It’s also a smart idea to do regular spot checks inside your GBP account. Select the “Suspended” filter to review any suspended listings in your account.

The Top 5 Reasons Why Listings Get Suspended

We regularly help businesses get their listings reinstated and have found these to be the top reasons why Google suspends listings:

Why Does Google Suspend User Accounts?

Quite often, suspensions happen because there is an issue with the Google account, not necessarily the business itself. For example, it could be an SEO company with bad practices that were working on a perfectly legit business.  Therefore, the account got suspended and nothing bad happened to the listing itself.

Account suspensions can be triggered by “spammy” edits via Google Maps. If you have enough of your edits denied and you get automatically flagged as a spammer, it will cause you to get an account suspension and the listings you manage will get suspended.  I concluded this after talking to several users and analyzing what actions they took right before the suspension happened.  Please see the section on avoiding suspensions (below) to see how I suggest going about editing on Google Maps to avoid suspensions like this.

If you get an account suspension, it’s likely you will lose photos & review responses since those can’t exist without the Google Business Profile being claimed.

We have found getting either type of suspension has not shown to have a negative impact on ranking if the listing gets reinstated later.  For example, a locksmith wouldn’t experience a decrease in ranking if his listing got wrongfully suspended and then reinstated.  It is different than organic penalties in this way since there is no “recovery” period. I have seen one case where the rankings did drop after reinstatement, but this was due to an error by the Google Business Profile support team. In that case, the reinstated listing was connected to a new CID number so the listing was treated like a brand new listing even though everything else was the same as before.

We had an account suspension last summer. One of my employees had his account suspended (wrongly) and it was fixed within a few days. It caused soft suspensions for about 2 dozen listings and a hard suspension for Sterling Sky’s listing. Our findings were that rankings literally bounced back to where they were before in both cases. Screenshots below. 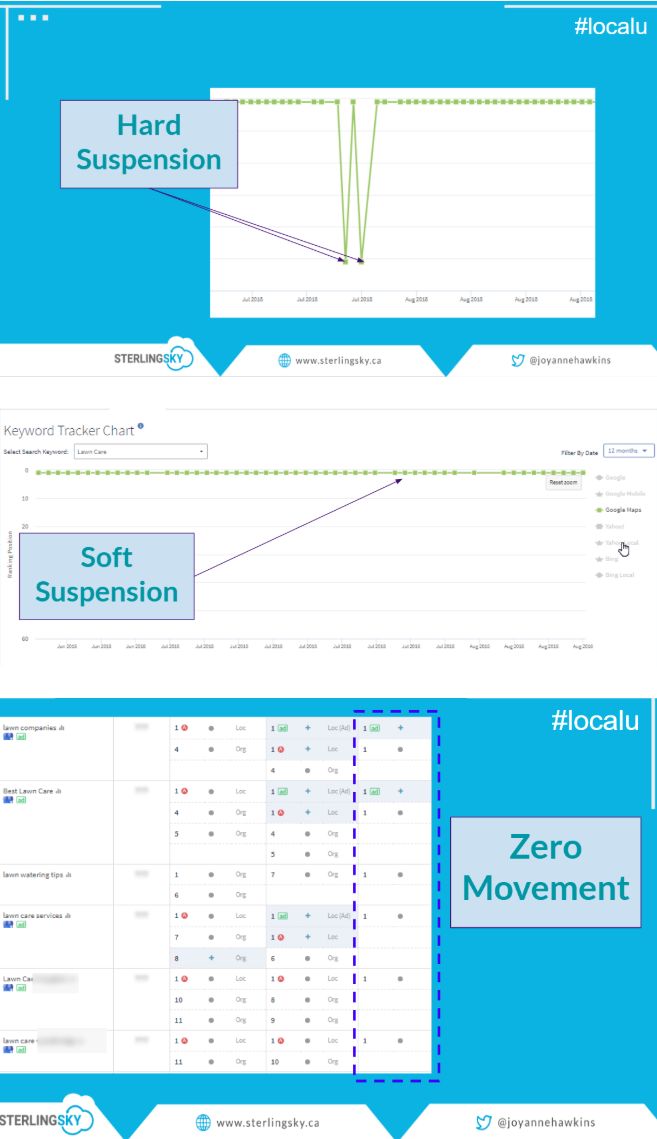 We also did a survey at a LocalU Advanced event to poll the audience to see what others thought about this. Here are the results of that: 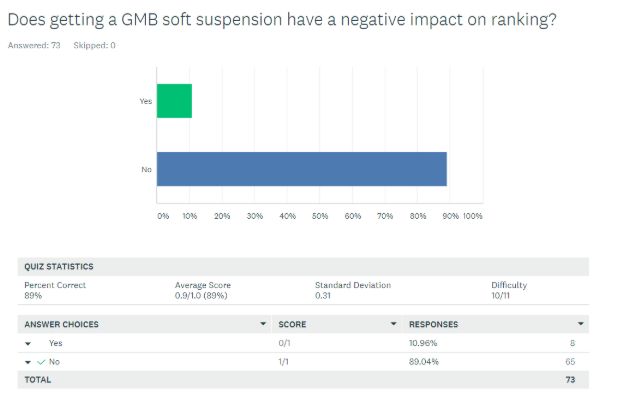 Why is Google Business Profile Support Telling Me to Create a Duplicate When I Got a Suspension?

I have had several users tell me that when they have a listing that gets suspended that they are getting this response from Google’s support teams:

“I would like to inform you that the existing business page under the account cannot be reinstated. Therefore in order to make the business page live on Google you need to create & set up a new business page for the location and get the page verified.”

This confuses a lot of people who think Google is telling them to create a new listing.  In reality, they’re just saying they want the user to add a new listing and go through the verification process again.  Since doing this will prompt the user to claim the existing listing on Google Maps, it’s not actually creating a duplicate anywhere.

Should I Recreate the Listing?

No. The old listing that got suspended would have ranking power attached to it; the new listing would not. Therefore, it would most likely not rank as well if you created a new one. You would also lose reviews (only a Google employee can transfer them).  If the listing should not have been suspended because it doesn’t violate the guidelines, it’s imperative that you get it reinstated by filling out a reinstatement form.

How to Avoid Suspensions

As of June 2019, the only way to get a listing reinstated is to fill in the reinstatement form. If you try to contact Google via any other method, they will just redirect you to the form.  Before you send the form, make sure you do the following

Turnaround times on the reinstatement form are normally only about a week but this can vary significantly if there are a lot of suspensions happening at the same time.  In the last half of 2022, wait times were closer to 3-5 weeks.

Need help with a reinstatement? Let us know!

This article was co-written by Joy Hawkins

What is the Effect of Leaving Photos with Google Reviews

As we near the end of our case study on reviews, this next bit of…

The Vicinity Update: What You Need to Know About Google’s Largest Local Algorithm Update in 5 Years

On December 8th, one of our forum users asked about some serious differences they were…