Back in 2021, we did a case study about upvotes.  In that study, we determined that upvoting a review does not move the review up in position.  In our latest case study on upvotes, we wanted to see if reviews with upvotes stayed at the top of a listing longer than reviews without upvotes.

What is an Upvote?

Upvoting is a way for other users to “like” your review, meaning they found it useful or helpful in making a decision about whether to use a business or not.   Or some may look at it as a way to agree with what the reviewer is saying.  It is a very simple step, as the user just needs to click the thumbs-up feature below the review.  Underneath a review, you are able to see how many people have “liked” or upvoted that review.  In the image below, this review has been upvoted by 16 people.

Do Upvotes Keep Reviews at the Top Longer?

Since upvoting did not move reviews up, we did not think that upvotes would have an impact on how long a review stayed in the top 10 positions.  However, we were wrong!  In this study, we tracked reviews in several industries (lawn care, a jeweler, a marketing company, and a handyman) for six months to one year.  According to our study, reviews with at least two upvotes stayed in the top ten, on average, for almost 100 more days than reviews with zero or one upvote. 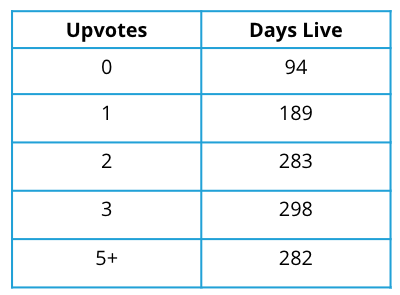 It does seem worthwhile to encourage customers to upvote reviews that they found helpful on your listing while they are leaving you a review themselves.