June 27, 2017 Update: They called me again today from 440-209-5739 and have changed their messaging a bit. They now claim they work “with Google” and are saying the listing was “flagged” or “red flagged”. They couldn’t tell me who or what flagged my listing (probably because no such thing exists).  They are also now going by just “Point Break” instead of “Point Break Media”, probably because this post and a thread on the forum complaining about them now rank high on Google for “Point Break Media” yet when you search “Point Break”, you get results for a movie/film made in 1991.

Last week I had the fun experience of getting a robocall from Point Break Media about my Google My Business listing and quickly realized this is the same company that I’ve been seeing floods of complaints about on the forum. If you’ve received a call from these people here is what you need to know.

Who is Point Break Media?

Unfortunately they are not the company that shows up on Google for a search for “Point Break Media”.  That’s right, they are an SEO company that doesn’t show up for their brand name (Note: They do as of this week now that the other company is linking to them).  This poor company that shows up first actually changed their contact page recently to clarify they are not the same company that is blowing up your phone with automated calls. I cringed when I saw it as I can only imagine how much their employees have probably been getting slammed with requests due to this.  It has to be pretty bad for a company to remove all their own contact details and replace their information with this.

As far as the real Point Break Media that is calling you, their site can be found here: http://pointbreakmedia.org/ and their phone number is 866-291-1356 or 800-303-9059 (and probably several others).  On their site they state “We are in no way affiliated with Google.  We are not a representative of Google or any of it’s companies and affiliates”.  They also told me this on the call when I asked if they worked for Google.  So, they are telling the truth there.

I could not find a listing for them on Google, Yelp, Facebook, Twitter or any 3rd party directory that a Local SEO company would generally be listed on.  Their website doesn’t list their address or employees or any other identifiable information that would tell you who they are, other than they’re in Florida.  This should instantly send big red flags to anyone looking at it.  I would also be a little wary of any company that has a “refunds” tab clearly in their menu (why are so many people wanting refunds?).

Their website is a complete replica of http://www.kivanni.com and http://publicbusinessreputation.com/ at the time of writing this.  Kivanni Marketing was/is owned by Michael McArdle who is also the CEO at ASAP Tech (Here is a lawsuit against that company).  Kivanni Marketing has a few recent complaints on the BBB claiming that they are calling and saying your Google account is compromised (similar to Point Break Media).  If Point Break Media isn’t affiliated with Kivanni or Michael McArdle, someone should probably warn him that another company just plagiarized his website including an exact replica of their Terms & Conditions.

Ben Fisher over at Steady Demand shared this voicemail with me which was the same automated message I got when they called me.  They basically start by claiming “if you do not take action to update your business listing, Google could remove your business or mark it as permanently closed”. 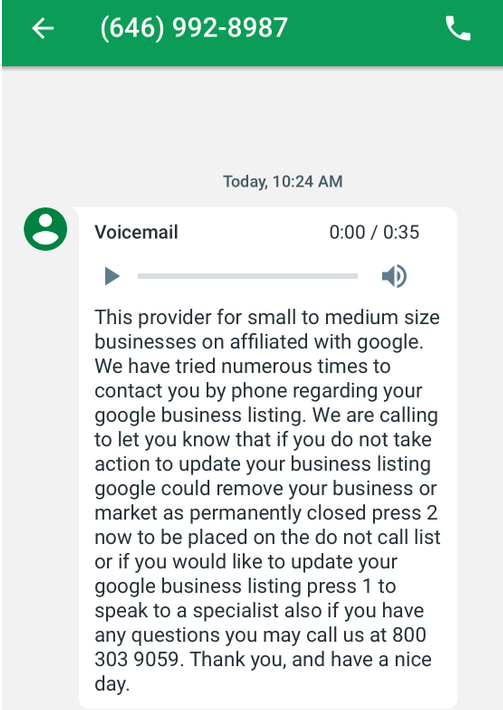 The Lies They Told

So as far as the conversation I had with them, here are the things they told me.

Lie #1: Without having your listing verified it is at risk for being removed or closed.

One of the users on the forum reached out to me and told me “They told me I must pay $400 to prevent my Google business as being marked as permanently closed, but when I asked them to confirm the address of my business, they hung up on me”. Google doesn’t just randomly remove listings or mark them closed just because they aren’t verified.  Although I’m not certain what the current percentage of verified vs unverified listings is, I would estimate that there are probably more unverified listings out there than verified ones.  Verifying your listing on Google via Google My Business allows you to better control the data but it doesn’t mean failure to do so is somehow going to screw you over.  *Sigh*

Lie #2: We will get you ranked for a 100 mile radius around your office.

Some days I really wish this was possible. I have lots of clients who would probably love it if I could get their Google My Business listing to rank for 100 miles away but the reality is that this isn’t possible because your office’s distance to the location the user is searching from and being located in the city the user is searching for are the #1 and #2 ranking factors.  This means that if you’re a lawyer in Chicago, paying this company isn’t going to get you listed in Naperville, Joliet, Aurora, & other Chicago suburbs.  If you want that kind of exposure, you won’t find it with Google My Business (Hint: Have you tried AdWords?).

Lie #3: We can guarantee ranking.

Take it straight from Google: Guaranteeing placement on Google is considered deceptive behavior because it’s not possible.

Lie #4: Google doesn’t have the resources to work with businesses who aren’t Fortune 500 companies

Google My Business has lots of ways you can contact them and these aren’t exclusive to people that only make a certain revenue per year.  Google My Business is a free service to all small businesses and Google doesn’t offer a service to improve ranking regardless if you make $5,000 a year or $5,000,000.

Lie #5: When Google’s system is flooded, it takes off all the businesses that aren’t claimed and verified

I had to cover my mouth to keep myself from laughing into the phone when the poor sales guy told me this.  I actually wrote about how the complete opposite in my article on Moz where I showed that you can’t just delete a listing on Google.  The exception would be if it’s spam or never existed, in which case you can request it be removed.  Even duplicate listings on Google don’t get removed, they get merged.  Google’s objective is to have a list/database of all the businesses that physically exist in a place so why on earth would they just start removing legitimate businesses?  It doesn’t even make sense.  Google won’t even remove listings for businesses who don’t want a listing if they are in fact located at that specific place.

For the next 3 lies, they are not based on my own conversion but one that was recorded on YouTube and I’ve linked to the section of the video for each lie.

It sounds like maybe they are writing fake reviews for their customers (how else do you update ratings for a business?) but even if they did that, there is absolutely no way to eliminate the possibility of a business getting a negative review online.

Lie #7: You’ll get a list of keywords that nobody else in the world can use.

I’m not really sure how this would even make sense. There is not just 1 result when you search on Google, there are thousands.

Lie #8: Google has no idea what companies are legit unless they are verified

(link to video) If Google relied solely on businesses verifying their listings as the only way to tell if a business is legit, we’d all be in some serious trouble.  Google gets information via Google Maps users, 3rd-Party data providers, and other methods to verify whether a business is legit or not.  They don’t rely exclusively on the business owner telling them what’s legit or not via the Google My Business dashboard.

Have you received a call from Point Break Media? If so, let me know what your experience was like in the comments.  Also, check out Google’s guide on how to deal with robocalls that sound like they’re coming from Google.