If you work in Local Search, you probably noticed that there has been lot going on in the last week.  The thread about this update at the Local Search Forum is currently our top trending discussion.  I’ve been spending hours digging into ranking reports, comparing SERP changes and looking for patterns across tons of different industries and geographic areas.

I was sick of naming algorithm updates after animals that start with the letter P so I felt the need to use something different. Google defines bedlam as “a scene of uproar and confusion” which I think is a good description of what I’ve been witnessing over the last week.  Here is the timeline of what’s transpired thusfar.

We started seeing huge changes in the local results (map packs) on this date.  Every client I checked had shifted and most of them were major.

Closer to the end of the week, we started seeing ranking shifts on the organic side.  Some of these were spikes in the opposite direction of the Maps ranking.

After days of panicking, many Local SEOs were able to relax when a lot of the insane changes from the 5th were corrected.  We saw tons of SERPs go back to looking a lot more like they originally had.  These ranking charts from Places Scout really help illustrate how much the update on August 5 impacted some businesses.

Not all changes were reversed.  Lots of businesses still have major changes when compared to how things looked on November 4th.  Also, not all changes were a decrease in coverage across several zip codes.  We saw lots of clients who had the opposite pattern.  For example, this lawyer started ranking for a term across several zip codes that he didn’t rank for at all previously.  With the continued update on November 10th, his ranking increased even more.

I was very happy to observe several cases (all attorneys) where previously there was one business occupying the only spot in the local results and this update has resulted in it changing to a 3-pack.

I notice this every time there is a major shift in local rankings.  You’ll start seeing spam that wasn’t showing before.  If you work in an industry that has a lot of spam, I would almost expect this to happen. 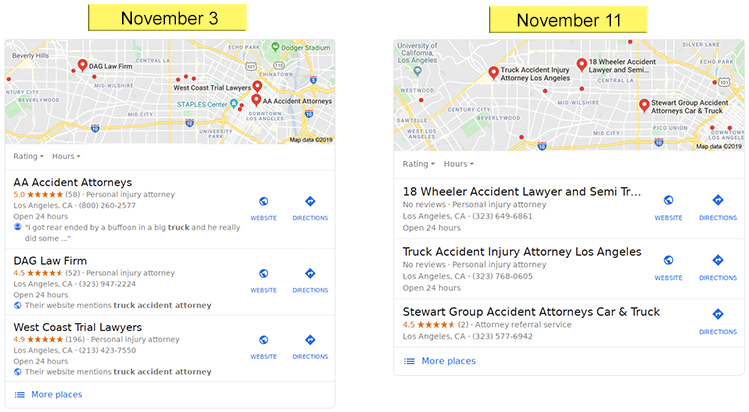 New Listings Have Been Filtered

I am hearing a lot of stories over at the Local Search Forum about listings vanishing.  If this is the case, it’s a strong possibility that your listing is filtered.  Listings that are near the same location of another business or share a website/phone number can have their ranking suppressed or missing altogether from the local results.

There are a lot of other patterns we have observed but I am waiting to study more cases before publishing additional findings.  I’m also not sure if the patterns present currently will stick around long-term.  Although local rankings appear to have stabilized, we never know what the future might hold.

Have you found that you have been getting reviews filtered by Google? Here... are some handy steps to try to get them to show on your GBP/GMB profile. #seo #marketing #sterlingskyinc @JoyanneHawkins