Review-Gating is Against the Google My Business Guidelines 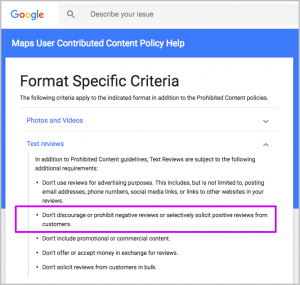 Updated: November 12, 2018 to reflect that review gating is not a new policy that Google initiated in April 2018 and added examples of cases where Google acted on businesses that were review gating.

When I saw the review guidelines change on April 12, 2018, I assumed that Google had updated their policies to indicate that review gating was now against the guidelines. I was wrong.  Review gating has been against the Google My Business guidelines for quite some time (if not always) and the update to the guidelines was simply a clarification, not a new policy.  I’ll explain how I concluded this based on the examples listed that got caught review gating (at the end of the article).

What Does Google do if They Catch You Review Gating?

I have been looking for examples on the Google My Business forum where users reported businesses who were review gating.  We’ve now seen several over the last few months and I’m going to highlight 2 cases.

In the first case the business was review gating on a widget on their website.  The business had over 400 reviews and when they were reported, over 80% of them were removed.  Here is the kicker – the reviews that were removed dated back 2 years.  The update to the guidelines was in April 2018 but Google removed reviews that were left way before then.  In my opinion, this is good confirmation that Google has not been okay with review gating for quite some time and updated the guidelines just to be more clear about it.  We saw something similar with virtual offices (they were against the guidelines long before the guidelines actually mentioned the specific words “virtual offices”). In this case, the average rating of the business dropped by 0.2 which also helps illustrate how review gating can lead to biased reviews.

In the second case, the business was caught review gating via a 3rd party tool.  They had 30+ reviews on their listing and after being reported, Google removed them all.

As of April 12, 2018 Google has updated the review guidelines to clarify (help explain) that review-gating is not allowed.  They added the following to their guidelines:

Business owners historically have loved this feature because they are terrified of negative reviews and would love the opportunity to only have 5-star reviews.  For more on why this is a bad strategy, read this study.

What should business owners do?

If you are using a review-soliciting platform that does this, you need to turn the gating function off ASAP.  Luckily, I use a company that is super-connected with Google My Business and had already been working on removing this as a feature because they had a feeling it was something Google didn’t like.  GatherUp currently offers a few different ways to collect reviews and although most of them were already in compliance with this rule, a couple were not.  I was sitting next to Aaron Weiche from GatherUp on Thursday at LocalU when this change happened.  He instantly made some calls and their tool is already updated so that it no longer offers this as an option.  Just one of the reasons why I love working with them.

What risks are you taking by review-gating?

If you decide to review-gate regardless of this guideline, you risk Google taking action and removing all your reviews. Don’t do it.        My original assumptions here were wrong.

Joy Hawkins
Owner at Sterling Sky Inc
Joy is the owner of the Local Search Forum, LocalU, and Sterling Sky, a Local SEO agency in Canada & the USA. She has been working in the industry since 2006. She writes for publications such as Search Engine Land and enjoys speaking regularly at marketing conferences such as MozCon, LocalU, Pubcon, SearchLove and State of Search. You can find her on Twitter or volunteering as a Product Expert on the Google My Business Forum.

————————–
Want to learn
Local SEO?
Enter Your Email Below To Get Access To Our Proven SEO and Traffic Tips From Our Newsletter

What We’re Tweeting About…

Considering adding keywords to your branding to help with ranking?

➡️ @ColanNielsen shares the benefits and potential pitfalls of rebranding to get keywords into your GMB name at @seland:
https://searchengineland.com/the-real-world-impact-of-keyword-stuffing-in-google-my-business-348509

One-star ratings on Google are deemed not defamatory and why that’s a ... problem by @joyannehawkins http://ow.ly/Rmwl102GVE9

Get the Latest Local
SEO Tips Delivered Free to Your Inbox

Send this to a friend